Thank you to the Pennsylvania Coalition of Nurse Practitioners for their recent endorsement for the Office of the National Nurse initiative.

RE: Office of the National Nurse (ONN) Endorsement

The Pennsylvania Coalition of Nurse Practitioners (PCNP) is pleased to support your efforts and endorse the Office of National Nurse. PCNP represents the interest of over 6,800 nurse practitioners (NP) throughout Pennsylvania. Our organization is committed to improving access to care and removing barriers to practice for advance practice nurses. The NP profession takes pride in its expertise and focus in the areas of health promotion and disease prevention, By directing our legislative initiatives on issues that advance the cause of safe, quality patient care, we strongly believe our contributions will have a positive impact on the health and wellness of our state and country. We believe and strive to support that our health care system should serve everyone and utilize nurses to the full extent of their education and clinical expertise.

PCNP supports the concept of creating an Office of the National Nurse and feels this position will further support the mission of PCNP. We believe that elevating the Chief Nurse Officer of the U.S. Public Health Service to full-time status and renaming this position as the National Nurse is a way to promote the visibility of nurses in the national health care debate and give nurses another voice at the federal policy table.

Thank you for all of your efforts and we wish you continued success with your initiative.

Thank you to ADVANCE reporter Shelby Evans for her accurate synopsis of the Office of the National Nurse initiative. Evans' article the "United State of Nursing" describes the vision for a National Nurse in these paragraphs:

"The mission for the proposed office is to establish symbolic national leadership by elevating the current USPHS post (Chief Nurse Officer) to a level of high visibility to the nursing profession and the public, to complement the work of the U.S. Surgeon General, to promote involvement in the MRC to improve the health and safety of the community, and to incorporate proven evidence-based public health education in implementing prevention strategies.

The importance of the prestige implicit in the concept of a national nurse is part of the reason the campaign seeks to grow the office from the current USPHS chief nursing officer role. The position already is aligned to work directly with the office of the Surgeon General and is reputable among public health nursing leadership."

To read the story in its entirety click here. 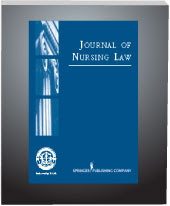 Volume 13, Number 1, 2009 of Journal of Nursing Law includes a manuscript, "The Office of the National Nurse", written by NNNO President Teri Mills MS, RN, CNE and Secretary Alisa Schneider MSN, RN. An abstract is now available on line accompanied by instructions on how to order the full text electronic version.

The following press release provides more evidence as to why we need an Office of the National Nurse. The public supports prevention and is willing to pay for it.

In the poll, conducted by Greenberg Quinlan Rosner Research and Public Opinion Strategies, 70 percent of Americans ranked investing in prevention between an eight and 10 on a scale of zero to ten, where zero means not at all an important health care priority and 10 means very important. Forty-six percent rated prevention as a 10 out of 10. Overall, prevention was rated higher than all other proposals, including providing tax credits to small businesses and prohibiting health insurers from denying coverage based on health status.

“This survey underscores what I have been saying from the outset: If we pass comprehensive health reform that extends coverage but does nothing to reform our broken system by emphasizing prevention and public health, then we will have failed. And we do not intend to fail,” said Senator Tom Harkin (D-IA). “We know that prevention and wellness efforts are a key to reducing costs within a reformed health care system. And they will be a centerpiece of the reform effort underway on Capitol Hill.”

“This report shows that the American people believe prevention and wellness are the cornerstones of a high performing health care system. And they’re right,” said Senate Finance Committee Chairman Max Baucus (D-Mont). “Today, we spend nearly $800 billion on health problems that are directly linked to lifestyle and poor health habits each year—about one third of our total health care spending. Simply put, that’s too much. Reforming our system to focus on prevention will drive down costs and produce better health outcomes. That’s why it is so important that we pass comprehensive health care reform this year.”

“This poll gives hard evidence that Americans know what works and are ready for government to invest in their health,” said Senator Ron Wyden (D-OR). “They’re looking to government to reform the system so that everyone is covered, and prevention and wellness come first. I agree with the majority of Americans that these are cost-effective solutions that will improve quality of life, prevent disease, and most important save lives.”

“For too long, health care has focused on treating people after they become sick instead of trying to help them stay healthy in the first place,” said Jeff Levi, PhD, Executive Director of TFAH. “This poll shows the American public strongly believes it’s time we shift from a sick care system to a true health care system that stresses disease prevention.”

“Our country will never contain health care costs until we place a higher priority on public health and prevention programs, said Congresswoman Kay Granger (R-TX), Co-Chair of the Congressional Study Group on Public Health. “An investment of just $10 per person per year in proven community-based programs could save this country more than $16 billion annually within five years. And, this new poll shows that a majority of Americans not only recognize the importance of prevention, but support spending a greater percentage of our health care dollars on prevention rather than on treating people after they become sick.”

“Any health reform effort must make a serious commitment to prevention and wellness. Not only does the science say we need to target disease before it strikes, but the American people are saying it too – loud and clear,” said Congresswoman Lucille Roybal-Allard (D-CA), Chair of the Congressional Hispanic Caucus Health Care Task Force. “Prevention is America’s top health reform priority because it will not only lower disease rates across the population, eliminate health disparities and better ensure equality, it also saves us precious health care dollars as we prevent disease and not just treat it.”

More than three-quarters of Americans (76 percent) support increasing funding for prevention programs that provide people with information and resources and creating policies that help people make healthier choices. Investing in prevention is popular across the political spectrum, with 86 percent of Democrats, 71 percent of Republicans, and 70 percent of Independents supporting investing more in prevention.

“This poll shows that Americans from coast to coast and across the political spectrum are overwhelmingly in favor of investing in disease prevention,” said Al Quinlan, President of Greenberg Quinlan Rosner Research. “More than three-quarters of Americans believe the country should invest more in keeping people healthier, and by a nearly four-to-one ratio, they support putting more emphasis on preventing disease rather than treating people after they become sick.”

“We know that strategic investments in disease prevention programs in communities can result in a big payoff in a short time -- reducing health care costs, increasing the productivity of the nation’s workforce, and helping people lead healthier lives,” said Risa Lavizzo-Mourey, M.D., M.B.A. president and CEO of the Robert Wood Johnson Foundation.

“We gave Americans a list of proposals being considered to reform health care, and investing in prevention trumped them all,” said Bill McInturff, Partner and Co-Founder of Public Opinion Strategies. “It’s clear that Americans see the value of prevention for reducing disease, improving quality of life, and lowering health care costs.”

“Spiraling health care costs and poor outcomes will only get worse in the absence of employer action and intervention,” said Robert J. Gould, Ph.D., president for Partnership for Prevention. “Through Partnership for Prevention’s Leading by Example initiative, we’re seeing a growing number of corporations support healthy behaviors through worksite-based programs. One of our members – Dow Chemical Co. – reports that its workplace wellness program saved the company more than 9,000 absentee days last year and contributed value equal to seven cents per share of company stock. Smart businesses pay for prevention, because prevention pays.”

The poll, which reflects the responses from 1,014 registered voters, was conducted by Greenberg Quinlan Rosner Research and Public Opinion Strategies from May 7 to 12, 2009, and is available at http://healthyamericans.org. The margin of error was +/- 3.1 percent.

Trust for America’s Health is a non-profit, non-partisan organization dedicated to saving lives by protecting the health of every community and working to make disease prevention a national priority. http://healthyamericans.org.

Attention Graduate and Undergraduate Nursing Students and Faculty of SON 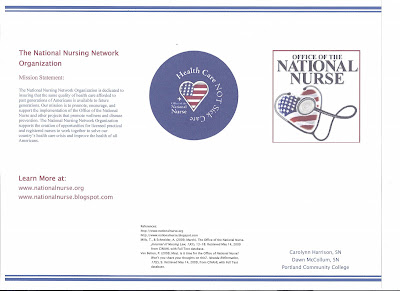 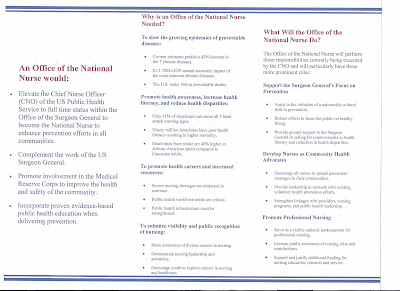 Pictured is the front and back page of a tri-fold brochure. You are welcome to make copies to distribute to others.

The National Nursing Network Organization continues to hear from graduate and undergraduate nursing students who are studying the ONN initiative and wish to obtain more information. We have recently had conversations by phone, email, and through Facebook with students attending George Washington University, George Mason University, University of Pennsylvania, and UC Irvine. Nurse educators and students from coast to coast believe that the ONN initiative is proactive, timely, sensible, and cost effective with benefits that could be far reaching for the nation.

Many are requesting that we explore the possibility of putting on a teleconference during the summer and/or fall that students and others could participate in without having the expense or burden of travel.

We have discussed this with those who work in the ITV at Portland Community College and they are enthusiastic about providing this opportunity. ITV is a state of the art educational videoconferencing system integrating several technologies and using equipment that is easy to operate.

• Turning on the system simply requires use of a remote control unit to activate a projector. The host has constant, live, visuals of every site.
• Pushing a button activates microphones in front of the participants. Participants at the sites see the presenter, other participants, electronic notes, graphics, videos, and other selected images on a large screen.

Please teri@nationalnurse.info if you are interested in participating in an ITV teleconference about the ONN initiative and we will put plans into motion to make this happen.