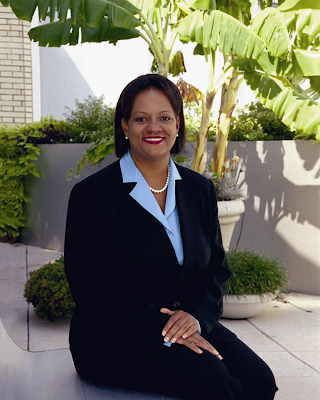 Important news! President Obama has nominated Regina Benjamin, MD to be our nation's next Surgeon General. Her acceptance comments indicate a strong personal commitment to enhance prevention to improve health outcomes.
Benjamin said the position would be more than just a job.

"My father died with diabetes and hypertension. My older brother died at age 44 of HIV-related illness. My mother died of lung cancer because as a young girl she wanted to smoke, just like her twin brother could. My family's not here with me today, at least not in person, because of preventable diseases. While I can't change my family's past, I can be a voice in the movement to improve our nation's health care and our nation's health for the future."

These personal experiences yield an attitude strongly supportive of prevention. If approved, her agenda as Surgeon General will likely be very aligned with those who support creating a National Nurse to help drive prevention efforts.

Dr. Benjamin graduated from Xavier University, Morehouse School of Medicine and the University of Alabama School of Medicine, and her medical training was paid for by the National Health Service Corps, a federal program in which medical students promise to work in areas with few doctors in exchange for free tuition. She has received numerous awards and recognition for her outstanding career and untiring efforts to provide care in her home community of Bayou la Batre, Alabama (a small shrimping village along the gulf coast). Dr. Benjamin converted her medical office into a small rural health clinic there dedicated to serving the large indigent population in her community.

Her extraordinary dedication and self-sacrifice have already won Dr. Benjamin national recognition. In 1995, she became the first African-American woman, and the first person under 40, to be elected to the American Medical Association (AMA) Board of Trustees. Dr. Benjamin also serves on the Board of Physicians for Human Rights.

Dr. Benjamin is a 1998 Mandela Award Winner, a former Kellogg National Fellow, has been featured as ABC Television's Person of the Week, and in 1996 was chosen by CBS This Morning as Woman of the Year.

The Board of Directors of the National Nursing Network Organization wishes the very best to Dr. Benjamin during her Senate confirmation hearings, scheduled later this year.

Health care reform remains this summer's hot topic in Congress and throughout the nation. Below is the letter that the NNNO wrote to Congressman Henry Waxman, Chair of the Energy and Commerce Committee in support of the Division C (public health) provisions.

Dear Congressman Waxman and Distinguished Members of the Energy and Commerce Committee,

The Board of Directors of the National Nursing Network Organization proudly stands with you in your recognition of the integral role prevention has within our public health system. We agree with many who have testified and written letters affirming that our healthcare system has failed to provide Americans, beginning with school age children, messages of prevention aimed at keeping them well.

In addition to providing the necessary funding to replicate successful programs of prevention, we urge you to closely examine the Office of the National Nurse initiative.

The National Nursing Network Organization proposes there be an Office of the National Nurse (ONN) established with a highly visible national nurse spokesperson to encourage prevention efforts by communities, families and individuals. The ONN would serve to mobilize interested nurses, students and retirees to become activists for prevention and health promotion in their local communities. It is proposed that the United States Congress enact legislation to initially create an ONN by designating the existing Chief Nurse Officer (CNO) of the United States Public Health Service (USPHS) to serve in this unique nursing leadership role. This would avoid unnecessary cost and duplication of services (Mills & Schneider, 2009).

Nurses, as both providers and consumers, see all too often how our healthcare system is faltering with increasing epidemics of chronic preventable diseases. Poor health literacy and continuing health disparities will be better addressed with a shift to focus on prevention in our communities. Eighteen other countries do better than the US at reducing preventable deaths (Dunham, 2008) and the US ranks 29th among all industrialized countries in infant mortality (Harris, 2008). Every year 1.3 trillion dollars is spent on managing the impact of the 7 most common chronic diseases, most are preventable (DeVol, 2007).

These figures speak volumes about our healthcare system, a system that is based on sick care not health care. A philosophical and cultural shift to focus on wellness at the national level and reinforced by nurses in every community would go a long way in promoting health, reducing costs and saving lives. Growing epidemics of obesity and diabetes resulting from dietary intake and sedentary lifestyles can be curbed only with a concentrated effort, inspired nationally and implemented locally.

The intent of creating an ONN is to have nurses, under the leadership of a National Nurse within the USPHS, support health promotion and deliver interventions to prevent illness in their own communities. By delivering broad-based, educationally sound messages on the national level and then reinforcing them in local communities, improvements in health literacy and the ability to reach across a broad and diverse population will be realized. Such health enhancing actions would be accomplished through involvement to strengthen existing service delivery such as the Office of the Surgeon General, the Medical Reserve Corps, the American Red Cross and others.

Nurses are well positioned to initiate this much needed shift in that they are 2.9 million strong, traditionally serve as advocates for those in need and are highly trusted by the public. They are the largest segment of the healthcare workforce, span all cultures, are present in all communities, and are skilled at assessment, education and implementation of evidence based interventions. Add to this number the thousands of student nurses in all levels of nursing programs and hundreds of active retired nurses who maintain licensure, and there is a huge resource pool from which to draw volunteers and contributors for community health promotion.

With guidance from the ONN, sanctioned by Congress to spearhead prevention, available nurses would be encouraged to participate with existing health organizations (American Heart Association, Diabetes Association, Cancer Society, MRCs) local schools, and community organizations with programs that can add a focus on delivering health promotion information. Nurse volunteers would engage community partners to introduce, emphasize and reinforce prevention concepts and establish best practices to change behaviors. Some key focus areas would include exercise, better nutrition, tobacco cessation, and mental health issues. The goal is to create a culture of prevention to improve health outcomes through national social marketing and local activism. Nursing efforts can promote both healthier behaviors and environments at both the systems level and the community level, as well as with families and individuals.

In a Robert Wood Johnson Foundation September 2007 newsletter, Dr. Susan Hassmiller, Senior Program Officer, states, "Nurses have a pivotal role in promoting preventive care since they spend more time with patients than any other health care professional. By educating and counseling patients about the importance of simple preventive measures, nurses can have a significant impact on improving health and extending lives. The health care system needs to empower and encourage nurses for them to be effectively engaged in this role." This statement represents the foundation of the proposal for an Office of the National Nurse.

Nurses realize our healthcare system is in serious trouble and needs revision. Dozens of nursing organizations recognize the strong merit in the vision of a National Nurse to shift us to prevention and have endorsed this proposal. Nurses know preventive medicine is better than reactive medicine. In addition, the Office of the National Nurse would enhance recruitment and integrate Nursing’s Agenda for the Future (American Nurses Foundation, 2002) that called for an improvement of the image and value of the nursing profession. The activities of the ONN will help fulfill this objective by portraying leadership for this key role in nursing, and allowing youth to view both hospital and community nursing as a nationally respected and valued careers.

We appreciate and support your endeavors to include prevention and wellness funding in health care reform legislation that will ultimately save lives and alleviate unnecessary suffering.

DeVol, R., et. al (2007) An unhealthy America: The economic burden of chronic disease-charting a new course to save lives and increase productivity and Economic growth. Retrieved June 1, 2009 from http://www.milkeninstitute.org/publications/publications.taf?function=detail&ID=38801020&cat=ResRep

The National Nurse Campaign is now available to Facebook users. If you belong to Facebook, one of the most frequently used social network in the world, we encourage you to join us. Participants are able to connect and interact with other members, and this is a powerful tool for any political campaign.

F Is For Fat

Once again, there is ominous news that underscores the need for a National Nurse to lead prevention efforts. Trust for America’s Health (TFAH) and the Robert Wood Johnson Foundation (RWJF) have released the sixth annual edition of the report, F as in Fat: How Obesity Policies Are Failing in America 2009. The report contains rankings of state obesity rates, reviews federal and state government policies aimed at reducing or preventing obesity, and provides recommendations for addressing obesity within health reform.

Basically, the report finds that in the past year adult obesity rates increased in 23 states while no state saw a decrease. In addition, the percentage of obese and overweight children is at or above 30 percent in 30 states. These statistics definitely present more rationale for establishing a National Nurse to lead prevention. This is because nurses incorporate interventions geared towards wellness into their plan of care and have proven siuccess in delivering health promotion every single day. The trust Americans have in nurses will also be useful as our nation tries to develop strategies to combat this costly epidemic.

“Reversing the childhood obesity epidemic is a critical ingredient for delivering a healthier population and making health reform work,” said Risa Lavizzo-Mourey, M.D., M.B.A., RWJF president and CEO. “If we can prevent the current generation of young people from developing the serious and costly chronic conditions related to obesity, we can not only improve health and quality of life, but we can also save billions of dollars and make our health care systems more efficient and sustainable.”

Key recommendations in the report for addressing obesity within health reform are closely aligned with the concept of National Nurse activities for prevention and include:

*Ensuring every adult and child has access to coverage for preventive medical services, including nutrition and obesity counseling and screening for obesity-related diseases, such as type 2 diabetes;

*Increasing the number of programs available in communities, schools, and childcare settings that help make nutritious foods more affordable and accessible and provide safe and healthy places for people to engage in physical activity; and

With leadership provided by an Office of the National Nurse, many nurses, including students and retirees, will advocate locally for such programs and services. Many will volunteer to assist with screening and counseling for improved nutrition, or advocate for safer environments to increase physical activity, and support delivery of evidence based interventions in their local communities. Nurses are already positioned in every community and can begin efforts to address the continuing needs.

“Our health care costs have grown along with our waistlines,” said Jeff Levi, Ph.D.,executive director of TFAH. “The obesity epidemic is a big contributor to the skyrocketing health care costs in the United States. How are we going to compete with the rest of the world if our economy and workforce are weighed down by bad health?” Surely having a National Nurse for prevention is a good start and should be a key part of any national strategy.