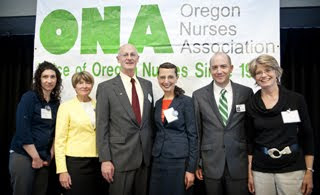 The National Nursing Network Organization(NNNO) is thrilled to announce the full support of the Oregon Nurses Association (ONA), a state affiliate of the American Nurses Association, for HR 3679, The National Nurse Act of 2011. The ONA made its decision to endorse this legislation by bringing an action report to its House of Delegates meeting that was attended by 182 members representing over 12,000 registered nurses. The motion before the House was that ONA advocate for the continued role and increased visibility of public health nursing in health care reform proposals including supporting the provisions for the National Nurse Act of 2011.

The ONA believes that as we continue to transform our health systems at the state and national level, it is important that we work to elevate the role of public health nursing to create community level systems, identify public health concerns, and achieve early intervention for identified needs. Our current health care system is based on sick care not health care. A philosophical and cultural shift to focus on wellness at the state and national level that is reinforced by nurses in every community would go a long way in promoting health, reducing costs, and saving lives.

HR 3679 proposes that Congress designate the USPHS Chief Nurse Officer (CNO) position as the National Nurse for Public Health to serve as a recognizable leader in health promotion and disease prevention, elevate nursing's influence and prominence, better utilize the expertise of nurses, and serve a vital function in our current climate of health care reform. The National Nurse for Public Health would assume the current duties of the CNO and would provide guidance and conduct media campaigns to promote public health.

ONA delegates UNANIMOUSLY gave their support for this legislation because they too recognize the National Nurse Act of 2011 has tremendous potential to advance the health and wellness of our country.