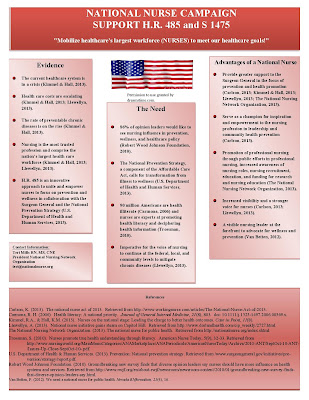 Using the democratic process, the University of Texas at Arlington’s MSN students voted to select one current legislative bill that they wished to advocate for and support. This assignment was designed for them to create an effectual class legacy. Thirty-one students from across the country participated and collaborated efficiently to find meaningful ways they could support The National Nurse Act of 2013 (S. 1475 and H.R. 485).

The graduate students adopted measurable goals to positively impact these bills. The “divide and conquer” approach was applied as they worked in groups to meet them. They feverishly added members to the FACEBOOK Group, The National Nurse Campaign that now has over 3,400 members. Several students have or are planning to meet in the district offices of their U.S. Representatives and Senators. Some have emailed or called their U.S. Legislators requesting endorsement on Capitol Hill. One group incorporated research that has been collected and composed a brief. That brief was distributed to many nursing organizations and stakeholders by several of the students. Additionally, this brief has been posted on hospital units' bulletin boards to educate others about the bill. Presentations are planned by some for upcoming local chapter meetings of national organizations to increase support of The National Nurse Act of 2013.

The National Nursing Network Organization is grateful for this level of support. We would like to hear from you if your class is studying this proposal. Please email the NNNO Board for information and ways we can help. 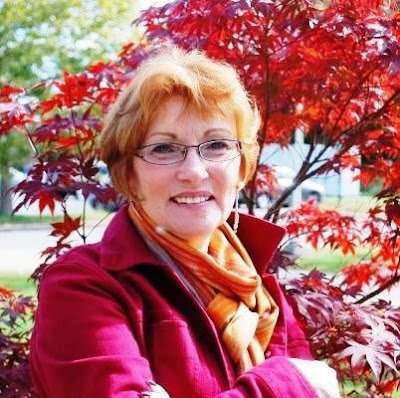 Thank you to registered nurse and Massachusetts State Representative Christine Canavan, elected to serve the 10th Plymouth District, for introducing the following resolution into the Massachusetts General Court. We are pleased to report that this resolution in support of H.R. 485, The National Nurse Act of 2013 passed unanimously.

Representative Canavan states, ““As a Registered Nurse in the Commonwealth of Massachusetts, I was deeply honored when then National Nursing Networking Organization came to me requesting a resolution urging support for H.R. 485, The National Nurse Act of 2013. Nurses are so vital to every community, no matter where you live and it is time we have a voice for all our needs. I know there is much work to be done, but if we all work together I have faith that we can make progress in our goals.” 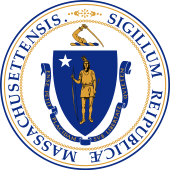 WHERAS, the Institute of Medicine's Future of Nursing report has called for the nursing profession to optimize its contribution to better meet the needs of all patients for quality health care; and

WHEREAS, nurses help inform and educate the public to improve the practice of all nurses and, more importantly, the health and safety of the patients they care for;

RESOLVED, That the Massachusetts State Congressional delegation be and hereby is respectfully memorialized by this Legislative Body to support H.R.485 known as The National Nurse Act of 2013, or similar legislation, designating the CNO of the US Public Health Service as the National Nurse for Public Health; and be it further

RESOLVED, That copies of this Resolution, suitably engrossed, be transmitted to each member of the Congress of the United States from the State of Massachusetts.