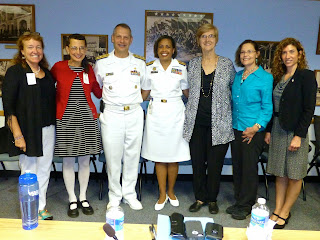 The Board of Directors of the National Nursing Network Organization had the privilege to meet with U.S. Public Health Service leadership while in Washington D.C. It was a thrill and an honor to have a conversation with Acting Surgeon General Boris Lushniak, Chief Nurse Officer (CNO) Sylvia Trent-Adams, and Special Assistant to the Chief Nurse, LT Chandra E. Jolley.

Rear Admiral Trent-Adams was promoted to her position last January, succeeding RADM Kerry Nesseler. In her role as CNO, RADM Trent-Adams is responsible for leading the Commissioned Corps of the USPHS (Corps) Nurse Professional Affairs and also serves as an Assistant Surgeon General. The USPHS Corps is an organization that includes a group of nearly 6,800 public health professionals dedicated to helping the underserved and vulnerable population. RADM Trent-Adams, a former Army nurse, also maintains a dual position as Deputy Associate Administrator in the HIV/AIDS Bureau within Heath Resources and Services Administration (HRSA).

We were very impressed by the caliber of these three leaders and left feeling inspired and energized. We are proud to recognize the work they do on a daily basis to promote, protect, and advance the health of our nation.

National organizations are stepping up and partnering with the NNNO to secure passage of the National Nurse Act of 2013. On September 10, 2014, the Case Management Society of America (CMSA) Leadership, Board of Directors, and Public Policy Committee, along with nearly 60 members of the CMSA case management community from various states across the country, met once again on Capitol Hill with House and Senate members of Congress. 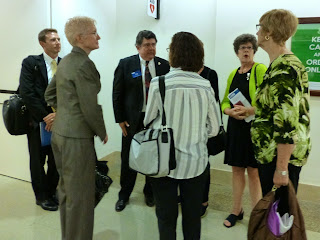 Coincidentally, this was the same day that NNNO advocates were on the Hill.

During their appointments, CMSA delivered an important message regarding the critical value professional case managers add to the health care system to ensure safe transitions and quality, efficient care for the populations being served across the health care continuum. Overall, CMSA reported they had a very successful day on the Hill.

They advocated for the clients they serve and brought several bills to the attention of legislators including the National Nurse Act of 2013. CMSA believes this bill would give a greater voice to issues important to nurses and nursing, as well as increasing health awareness, improving healthcare literacy, and reducing health disparities. The National Nurse for Public Health would raise awareness about what everyone can do to prevent illness while improving our own health and that of our families.