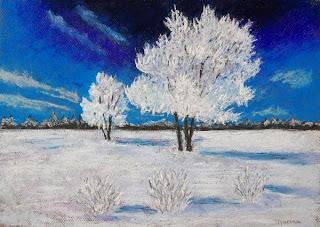 A new year is nearly upon us and we want to take time to reflect on the numerous achievements in 2012 that would have been impossible to achieve without your support. For anyone who wishes to take a trip down memory lane, click on the archived months of 2012 found at http://nationalnurse.blogspot.com to follow our journey.

Last December, Congresswoman Eddie Bernice Johnson (D-TX) introduced HR 3679, The National Nurse Act of 2011. The bill, co-led by Congressman Peter King (R-NY), garnered eighteen original co-sponsors; the number of co-sponsors is now forty-five! HR 3679 would designate the Chief Nurse Officer of the U.S. Public Health Service to be additionally recognized as the "National Nurse for Public Health." Thanks to the ongoing and strong support from so many of you, plans are underway for re-introduction in the 113th Congress!

We are fortunate to have Elizabeth McPhee RN as the newest member of the National Nursing Network Organization's Board of Directors. The NNNO Advocacy Team currently has 46 members representing 23 states. These individuals have been instrumental in advocating for their own elected officials to support HR 3679 and also in helping to spread the word about this campaign through publications and presentations. Additionally, they have helped to increase the membership of the social networking groups on Facebook (The National Nurse Campaign -over 2550 have signed up) as well as LinkedIn (The National Nursing Network Organization). If you belong to Facebook or LinkedIn, please visit these pages and sign up!

Thank you to NNNO Advocacy Team Member Kathy Quan who has volunteered to lead the Twitter Account that provides announcements and updates about activities surrounding the National Nurse Act. Follow the NNNO @aNationalNurse.

Several of you sent us donations, some in the form of checks and others via recurring monthly donations through PayPal. Thanks to supporters and especially Elizabeth McPhee RN who coordinated efforts for fundraising opportunities with the Portland Timbers Soccer Team. The popular $20 campaign continued and over 100 informational packets were personally delivered to members of Congress on behalf of those who made these twenty-dollar contributions.

We greatly appreciate this financial support to help maintain the website, mailing list, and brief travels to educate others about the need for a National Nurse for Public Health. 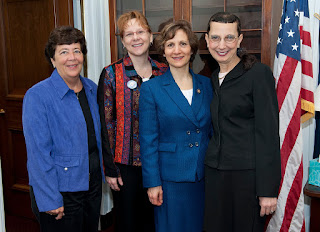 As a direct result of your contributions, members of the NNNO Board of Directors and many supporters traveled to Washington DC last March and again in August to meet with several members of Congress, their staff, key organizational staff, and also with leaders who serve in the USPHS. ADVANCE for Nurses published a photo journal of the National Nursing Network Organization's March visit to Washington DC. The story, Promoting HR 3679 described how this group of grassroots nurses traveled to Capitol Hill to lend their support for HR 3679, The National Nurse Act of 2011.

More than 115 organizations and prominent individuals and four state legislatures have endorsed HR 3679, The National Nurse Act of 2011. Many of these groups provided individual letters of support that were addressed to Congressional leadership. The Oregon Nurses Association (ONA), a state affiliate of the American Nurses Association, unanimously voted to support this legislation because members recognize the tremendous potential the National Nurse Act of 2011 has to advance the health and wellness of our country.

With leadership provided by Assemblywoman Aileen Gunther, the NY Assembly overwhelmingly passed K957, a resolution memorializing the NY Congressional delegation to support HR 3679, The National Nurse Act of 2011. "Nurses already incorporate teaching as a cornerstone of nursing care no matter where that care is being delivered. In addition, nursing interventions that promote health are powerful tools for prevention in community settings," said Assemblywoman Gunther. "Furthermore, the Gallup poll indicates year after year that Americans listen to nurses about their health. We believe the nursing profession has the expertise, the skills and the commitment needed to shift the tide towards prevention and begin to improve our nation's health at a time when chronic preventable conditions are occurring at astronomical rates."

Thank you to the Cleveland Clinic's Clinical Nurse Specialists for inviting NNNO President Teri Mills MS, RN, CNE to keynote their annual conference, Celebrating CNS Practice: The CNS as a Bridge Builder. The hospitality extended by the host committee was amazing. Even after spending a short period of time with this group of nurse leaders, it is evident why the Cleveland Clinic is recognized for its hard work ethic and excellence in the healthcare arena. Innovation and new ideas are encouraged and supported, especially when they are focused on improving the health of our country.

Supporters of HR 3679, The National Nurse Act of 2011 can still listen to an informative story produced by the Center for Health, Media, and Policy last August. Diana Mason PhD, RN, FAAN, the co-director of the Hunter College Center for Health, Media, and Policy in New York interviewed two proponents of the legislation: Susan Sullivan MSN, RN, PHN who serves as the Secretary of the National Nursing Network Organization (NNNO) and Anne Llewellyn, RN-BC, MS, BHSA, CCM, CRRN Editor in Chief Dorland Health and NNNO Advocacy Team Member. Mason, Sullivan, and Llewellyn are in agreement that HR 3679 is timely and claim a National Nurse for Public Health would boost current efforts in the prevention arena by working to strengthen existing programs such as the Medical Reserve Corps and First Lady Michelle Obama's Let's Move Campaign.

Thank you to Blog Talk Radio hosts Keith Carlson and Kevin Ross for inviting Teri Mills MS, RN, CNE, President of the National Nursing Network Organization to discuss HR 3679, The National Nurse Act of 2011 on their program last July. There is now a link to an archived version of the show available and all are encouraged to listen to the program. The hosts stated they received many communications from regular listeners who felt as if the topic was timely and significant. They also shared that the show was informative and inspirational. 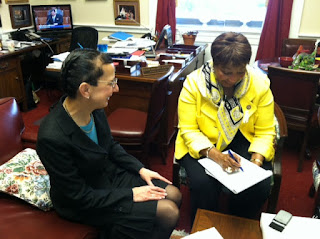 ELECTED RN: Congresswoman Johnson is the first nurse ever elected to Congress. She continues to be a strong leader for public health. Teri Mills MS, RN, CNE and Congresswoman Eddie Bernice Johnson (TX-30) discuss the language in HR 3679.

Thank you to Congresswoman Eddie Bernice Johnson (TX-30) who wrote an inspiring op/ed to honor and acknowledge our nation's nurses. The article, Recognizing and Thanking Our Committed Nurses, was published in the Huffington Post during Nurses Week last May.

Congresswoman Johnson stated, "While our country continues to shift towards a nationwide focus on prevention and promotion, I believe that nurses should be standing in the forefront of this reformation. It is for this reason that I propose that we as a Nation designate a National Nurse for Public Health. The National Nurse would function alongside the Surgeon General and focus on health promotion, improving health literacy, and decreasing health disparities."

Numerous articles about the National Nurse Act in 2012 were included in newsletters that went out to thousands of nurses and key stakeholders. One example, "The quest for a ‘national nurse’ continues" was published in the April issue of AFT (American Federation of Teachers) News that is distributed to 1.5 million members.

One of the first Internet search engines, http://excite.com, recently recognized http://nationalnurse.blogspot.com as Number One on the list of Top 20 Nursing Blogs on the Internet. 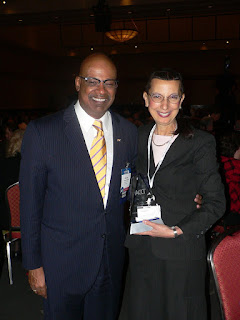 Teri Mills MS, RN, CNE who serves as President of the National Nursing Network Organization received the prestigious 2012 Faculty Member Award for the Pacific Region from the Association of Community College Trustees. Teri was also a finalist in the Mountain West Region for the Advancing and Leading Nursing category in Nursing Excellence.

Quote for the New Year:

Cheers to a new year and another chance for us to get it right.—Oprah Winfrey

You are all extremely important in our work to pass legislation for a National Nurse for Public Health - THANK YOU to the all of you who tirelessly provided us with advice, expertise, and support this past year! We wish you the happiest and healthiest of holidays and look forward to 2013!

Prevention and the Fiscal Cliff 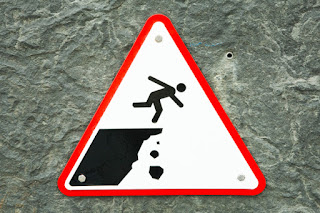 As Congress and President Obama continue to negotiate to solve our budget crisis to avoid the fiscal cliff, it would be wise to consider the financial impact that the seven most common chronic diseases have on our economy. Diabetes, cancer, and heart disease, and underlying causes such as obesity and tobacco use, affect more than 130 million Americans and contibute greatly to our out-of-control healthcare costs. According to the Partnership to Fight Chronic Disease, "these conditions cost more than $1 trillion a year, and if there is no change, could balloon to nearly $6 trillion by 2050. To break it down even further, largely preventable and highly manageable chronic diseases account for 75 cents of every dollar we spend on healthcare in the U.S., every day, every year. Even more daunting, chronic disease costs consume more than 90 cents of every dollar spent on Medicare and Medicaid. In contrast, we spend less than 5 cents on prevention."

In order to improve our nation's health and utilize our monetary resources more effectively, we must put more effort to keeping Americans healthy, rather than waiting until they become ill and require expensive care. Prevention is key to helping Americans live longer, healthier lives and will also increase our country's productivity. This is why supporters continue their efforts to bring HR 3679 National Nurse Act of 2011 to fruition. This legislation will bring nurses to the forefront as embedded authoritative delivers of key prevention messages. Nurses will become more mobilized toward health promotion along with caring for those who are ill.

By designating the Chief Nurse Officer of the US Public Health Service to be officially known as the country's National Nurse for Public Health, Congress will provide an impetus for promoting the Medical Reserve Corps and strengthening existing public health infrastructure and resources, through which willing nurses and other healthcare workers within each community would deliver and reinforce messages of prevention.

More than 115 organizations and prominent individuals and four state legislatures have endorsed HR 3679, The National Nurse Act of 2011. Plans for reintroduction in the 113th Congress are underway, and more support is needed. Email the National Nursing Network Organization today and learn how your organization can be added to the growing list of endorsers.